Blizzard have been making solid efforts in advancing the electronic sports industry. Not through wantonly splurging money on events, although they have, you see. Instead, Blizzard has forged a series of highly competitive and skill-based games. Heroes of the Storm (HotS) is no exception. Some call it a massive online battle arena, but its developers have come up with a more apt name, a hero brawler. The game even has its own hero brawler map, which is where players sometimes end up if they have been flaunting the rules. In the following Heroes of the Storm review, we will not dwell on stellar graphics or brilliant voice acting. Instead, we will focus on the competitive dimensions of HotS.

Heroes of the Storm Info: The Lore Is the Lore

The first trailer came out almost four years ago, allowing Blizzard fans to glimpse at the future sword-and-sorcery saga

The Nexus is the setting in which Heroes of the Storm takes place. It is a spot-on name, as the Nexus is actually a vortex that has brought together a bunch of worlds colliding. This explains why you can see characters from all known Blizzard titles caught into gory skirmishes across countless battlefields. An honest review of Heroes of the Storm ought to cover those well. New users who have been gaming enthusiasts and sworn fans of Blizzard’s for years, know the lore and they have been diligently soaking Diablo, StarCraft, and WarCraft tales as they soak experience in Heroes of the Storm.

Blizzard has done well of tapping into the stored-up fondness generations of gamers have for its products. There is also the benefit that as someone who plunges into action for the first time, you cannot help but feel flattered that you are familiar with every face on the field of battle.

Welcome to the Nexus – A Plump Choice Awaits 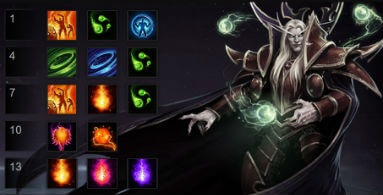 Kael’thas talents neatly broken down by level for you. You could go through a talent calculator to explore heroes’ talents or have a go at your own character concept.

A major part of our review of Heroes of the Storm will be dedicated to what the game gets right and what the game gets different. For its part, Blizzard’s own desire to stand out from the crowd has been largely successful. HotS will not have you scurry after gold or items during a match, which is a relief to anyone who is just entering the fray. Instead, you have the talent system. We have talked talents at some length in our take on the competitive scene and some HotS tips about how to be a little better at the game.

Since talents cancel out the need for in-game currency, which can be exchanged for itemization, it is time to take a closer look at those. It is familiar concept drawn from earlier Blizzard products. Talents are granted every several levels and they determine what direction your hero will take. Some are less offensive and try to prop up your team’s defences whereas others are damage per-second-focused abilities. At level 10, you receive a Heroic Ability and level 20 grants you a Storm Ability, both of which can simply be described as ultimates.

Heroes of the Storm Info Supernova – Exploring the Great Beyond

Many good things can be said about the heroes’ talent system. It is exciting and new. It offers versatility that does not boil down to items, but to altering the very DNA of the animated champions and fitting them in roles that have been previously unknown to them. If you want to get a better understanding of the current classification of heroes, you can additionally have a flick through the hero tiers list, both of which will be quite helpful to novice and pros alike.

Now, a game with so much room to grow as a player has necessitated an outlet of all this pent-up desire to shine and outsmart opponents. Blizzard have thrown in their weight and supported the eSports march of Heroes of the Storm without a semblance of hesitation.

Penning a half decent review of Heroes of the Storm demands that we have a closer look at what is currently afoot. With another iteration of the Heroes of the Storm Global Champions imminent, all eyes are fixed on how the new season will pen out, with a lot of hoping going to Blizzard’s finally committing a special tab for the HGC in their launcher.

In reviewing Heroes of the Storm, we will be remiss not to mention the far-reaching ripple effect its arrival has had. The world has changed profoundly. Brainy enthusiasts from all dominions of Blizzard have rallied under the same banner and channelled their love for game history, smart apps, and a good talk, giving rise to dozens of respected forums and useful websites.

Plunge into the bowels of the Internet and you will come across talent calculators, allowing you to hammer out solid talent builds. Statistics will be abundant all over the place, with the most popular builds broken down by percentage. Win and loss rates along with how teams fair against one another are just part of it. You will even be encouraged to create your own hero concepts and pitch them to Blizzard. The possibilities, it seems are endless, and the community around the game is both close-knit and often produces meaningful discussions.

Heroes of the Storm Info On Weeding Out The Bad Apples 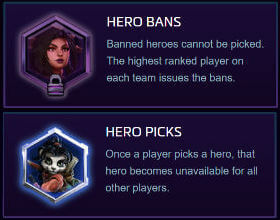 A look into the drafting sequence of Heroes of the Storm. Toons are picked and removed from the pool and so are bans.

Nobody can police the Internet. Blizzard has definitely not tried such a move, but they have invested a lot of time streamlining the game and dissecting the chunks of toxicity that have often proven game-ruining for rookies. More elitists MOBA or unfulfilled hero brawlers out there tend to punish new players for their lack of knowledge. This is exacerbated by short-tempered players who throw insults at their fellow gamers. Well, Heroes of the Storm would not stand for any of that.

You can only communicate within your own squad and this is encouraged by the developers. And Blizzard encourages players to communicate within teams so that they may put together a stronger and more reliable squad. In our tips section entitled Pick Strong, But Also Pick Smart we have encouraged new players to pick not only the most overwhelming heroes available, but also those they personally can play best. And if you are going to run into trouble, just ban the hero that is the source of your trepidations.

What is a Heroes of the Storm review without covering the basics after all? Blizzard have done a sterling job out of their tutorial. We have been tinkering with MOBA for as long as we can remember, and so have you, we will bet you. The entry chapter to your HotS exploits is a concise and streamlined experience with just the right amount of challenge in it. Players are quickly introduced to the game.

Further down the road, the game does well of teaching new players the basics. Loading screens are filled with terse descriptions of the maps’ objectives that, combined with in-game pings, are usually enough to pinpoint the goal of the current battle arena you have been thrown into.

Heroes of the Storm Reviewing the Experience

If you have been with the community for long enough, you may have noticed that Blizzard periodically rev up excitement by adding a lot of excitement around their intended moves. A late Tyrael rework came along with several images being posted on both the official launcher and spreading hype across forums. The images, posted in Korean were translated by fellow community members and the word was out.

But Blizzard’s game does not solely bring together its homespun worlds. There is more to it. Communication across regional communities is also a marked underpinning. Heroes of the Storm info stems from myriad sources. South Koreans come to the Reddit to post amusing bugs. Apparently, Stiches cannot digest Protoss.

The Nexus Is Rich, eSports Betting

With the rise of eSports, bookmakers, an outlandish concept to the contemporary gambling enthusiast have moved in. But eSports is not just about the prize pools. You know that Twitch.tv generates billions of revenues by broadcasting ads to plenty of gamers with disposable income. And the world is becoming more open to the notion of eSports as a whole.

As such, there are rich opportunities for Heroes of the Storm betting. We have covered this here and a separate section has you covered when it comes to both betting at home and at a number of reputed bookies.

The Heroes of the Storm in-game store is a decent spot to don fresh garments with style. It is a place where you can purchase new heroes. Add skins and mounts as well as buy something known as stimpacks (small items that boost your overall experience and gold gain) and you have yourself quite the market place. None of this affects the actual gameplay, but it spruces up your inventory. Along the way, you also earn chests, which may on occasion yield a new toon to add to your pool of owned heroes.  You can acquire useful Heroes of the Storm info on skins in any discussion board online.

A Review of Heroes of the Storm: Closing Words

Heroes of the Storm is an excellent hero brawler with a vibrant electronic sports scene and a burgeoning gambling one. The game is doted on not only by accomplished developers, but countless of fans who pen comprehensive tutorials, busy themselves with theory crafting, second-guess the establishment, and dreamily outline a perfect future for their beloved game. Heroes of the Storm belongs to a family of newly-spawned video games that have decidedly entered the fray for the most accomplished eSports product currently available.